Well, I've done it again.  It's been over a month since the last post.  But that's mostly because I've been busy with my new internship!

Yes, I finally got one.  It was very short notice, so I wasn't able to give my other job enough notice to get out of most of my shifts,  which made July the month of no days off.  I just lacked the mental energy to force out a or even think about a post.  Other than that (and the strain on my back from bending over a microscope all day) it's been a really great experience so far, and I'm glad I have the opportunity to do it.

I've been up to many a nifty thing in the last month.  I'll be sure to update you on all of it in the very near future.  But for now, let's talk about canning cherries! 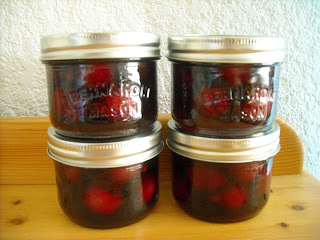 This week, I tried my hand at canning for the first time!  Okanagan cherries were on for $2.99/lb at the produce store, so, naturally, I bought about ten pounds over the course of the week.  I shared, ate and froze eight pounds, but two of them went into the great canning experiment.

I've got to admit, canning is terrifying the first time if you're the worrying type.  It sure was for me, at least.  Are the jars and lids sterilized?  What's that sound?  Did they seal?  Did I wipe the rims well enough?  Is the water hot enough?  WHAT IF I EAT IT AND DIE?!

Well, I'm happy to report that I did open one of the jars, and I did eat it, and I did NOT die.  They're even pretty darn tasty.  I used this recipe from Simple Bites' Canning 101 Series.  I made three 250mL jars each of the vanilla and almond variations.  It was easy, pretty quick, and I'm pretty happy with the result. I might use tall jars instead of short and maybe a slightly heavier syrup next time though.  It's also a good idea to make an effort to keep the types separated.  I forgot which jar was which before I could label them.

If you're thinking about home preserving, you should really give it a try.  It was scary, but really rewarding.  And the second time, you'll be experienced, so it won't be scary any more!
Posted by Kate M. at 8:14 PM 3 comments:

Sorry about the hiatus.  The remainder of June was kind of dull, and there was little to report.

Yesterday we took a long drive out to French Beach Provincial Park.  It was so windy that I had a hard time holding the camera straight.  We got to watch some pretty impressive waves because of it. 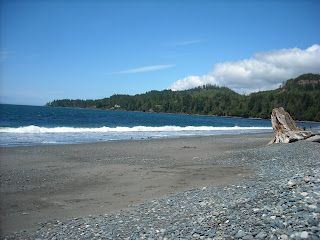 Going to French Beach was supposed to fulfill my goal to go somewhere I've never been on the island, but when I got there, I was surprised to find that I recognized it.  My dad took my brother and me there when we were kids, but I never knew what it was called.  I've been looking for this place for years! 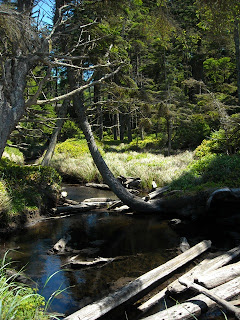 After the beach, we finished off the day with a late lunch in Sooke.  Not a bad start to the summer.
I have big plans for the rest of this week, so I'll be back really soon to report on my goings on and to update on the garden.  It's doing so well!
Posted by Kate M. at 9:33 AM 2 comments:

It's 10:30 P.M. which seems to mean it's time to have a drink and dream of a better future. That's how every evening has turned out for the last few days.

I'm feeling restless. Several times a day, I've been overcome with an urge to just... GO. Big changes need to happen. That is, after all, what I'm supposed to be documenting here.

It seems like every step I make towards a new life makes me want to run for it. I say this every year, but this time I mean it; everything is about to change.

I can't be the only one who feels this way. What's stopping us from pursuing our dreams? No excuses, now. Is there any REAL reason why we can't run away and join the circus or see the world? Sure, there may be some inconveniences and it may be hard, but isn't happiness worth working for? Is it worth risking everything for?

We know what will make us happy. Admit it. I think I've know for my whole life, but I've always felt like I have to put others' happiness and expectations before my own.  I've believed all of the discouraging things I've been told.  That's pretty silly, right?

Honestly, I may be just a little bit drunk right now.  Ernest Hemingway said to always do sober what you said you would do drunk. Granted, he said that it would teach you to keep your mouth shut, but that's not how I see it. What I say when I drink hasn't been filtered through self doubt, expectations or practicality.  It's what I really think, and often what I know I have to do.

I'm not going to lie to you.  I drew this today, not yesterday.  But I will NOT make a habit of it, so help me.

On the upside, I had loads of time to work on this page while I was "working" at my volunteer job at the nature house.  It wasn't an amazing day, so I had lots of long visitor-less stretches.  Also, there is a library full of books with pictures to reference for the drawing.  Bonus!

The theme for today was "my all time favourite song."  I was torn between several songs.  In the end, I decided on the one that I felt would be the most fun to draw. What can I say?  I'm a sucker for The Beatles.

It's that time again.  Time for a 30 Day Journal Challenge update!

Day 7: A love letter to someone special It's to my cat.  I know what you're thinking, and no, I'm not a crazy cat lady.  I'm not close enough to anyone in my family to feel comfortable writing a letter like this to, and my partner isn't the smooshy love letter type.  But Rosie has always been there for me, even when we lived at home and times were tough for her.  I would have understood if she decided to find another home to feed her.  When I had no friends and my parents were distant, she was there to play and cuddle with me.  She's a cat, but she really means a lot to me.  Now she's getting old and starting to get confused.  I just wish that pets lived longer.

If she was a dog, it wouldn't sound as crazy.

Day 8: What I would put in a time capsule to be opened in at least 100 years. Of course I would never actually tuck these away never to be seen again by me.  It's more of a snapshot of my life right now in objects.  I decided to try my hand at an actual font and experiment a little with ink.  It was so much fun!  I'm really happy with how everything turned out. 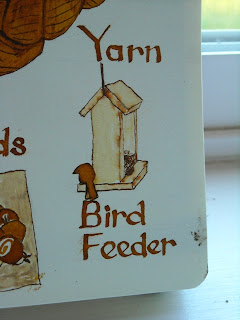 The little bird and the feeder are my favourite part, though I'm also pretty fond of the seed packet.  Cute!

Day 9: Something random with no pens! This was so much fun to make!  I think there will be a lot more mixed media in my future.  Stickers, string, a crossword, wrapping paper, a feather, ribbon and an envelope that was given to me by my grocer for lunar new year.

I'm excited to get started on today's topic: Illustrate your favourite song!  Don't touch that dial.
Posted by Kate M. at 11:54 AM 1 comment:

As mentioned in my last post, it has been a busy, busy week.  But I have taken time out of each day to keep up with the 30 Day Journal Challenge.  From now on, I should have plenty of time to put a lot of effort into each day's entry and to make a daily update on it here.

Without further ado, here are the entries.  You can click on the pictures to enlarge them. I'm not crazy about the visual impact, but I like the goals. Can you tell I'm a fan of The Simpsons?  This one makes me really happy.  And I can't wait to start scuba diving!  I already have a buddy lined up from work! I was trying to draw a dusty rose coloured dress and  old fashioned brown shoes, but I'm not too good at drawing clothing and my pencil crayons suck.
Day 5:  What are your summer traditions? These are old traditions that I would like to do again some day.  I'm not too happy with how this looks.
Day 6:  Write a love letter to yourself I feel a little bit silly sharing this with everyone.  It turned into more of an advice letter than a love letter.  I was worried that I wouldn't be able to fill the page, but instead I had to stop when I ran out of room.
Stay tuned for tomorrow's update.  The prompt is "write a love letter to someone special."
Posted by Kate M. at 11:55 PM No comments:

Wowza.  Has it ever been a busy week.  This is the first time since Thursday that I've had a chance to sit down and post.

It was my good friend Sylvia's twenty-fifth birthday last week.  As part of her gift, I made the cake for her party.  The cake is one of the things that I was so busy with, and it was totally worth it.  It turned out even better than I expected, and she loved it! 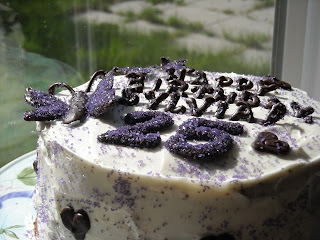 AND I finally had an excuse to use the cake stand I got for Christmas! 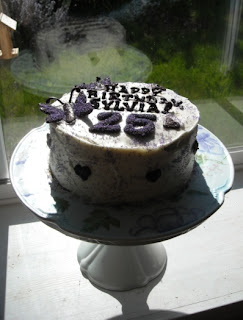 It was Swiss chocolate cake with French Vanilla whipped icing, and it was pretty darn tasty. The lettering and decorations are piped chocolate and purple sugar.  Not too shabby for a boxed cake mix and canned frosting.

It was so much fun to make. There will be many more baked goods in the near future.
Posted by Kate M. at 4:18 PM 2 comments:

Kate M.
I was born in Vancouver in 1987 and I haven't accomplished much since then. I love to knit, paint, read, write, explore, sing, cook and garden. But for the past seven years, I have been "too busy" or "not good enough" to do the things that I love. I'm trying to come out of my shell, find out what the world has to offer, grow as a person and learn to love life again.